The Six Most Popular Types of Indian Curry

The Indian sub-continent is a big place, so it stands to reason that there are not only going to be different types of Indian curry but different approaches to what is considered flavorful and what ingredients go into it. Below are some of the types of Indian curry you’re most likely to encounter in any Indian restaurant, not just Little India.

A dhansak curry has a distinct “sweet and sour” profile to it, but a decent amount of spice to it. It’s often served with a pineapple ring, both as a garnish and to add sweetness to the dish, depending on the chef’s particular tastes.

If there’s one dish that might be considered “universal” to all Indian restaurants, tikka masala is arguably it. The tikka element is the chicken or other meats cooked in a tandoor on a skewer, while the masala is the creamy sauce that smothers it.  The spices lend zest to the dish, but not a great deal of burn.

Climbing up on the heat scale is saag. Characterized by the presence of spinach, mustard greens, and other leafy vegetables, this particular curry has a pleasant but noticeable degree of heat.

Korma curries are spiced not for heat, but for flavor. Rather than cumin and black pepper, korma goes for flavors such as cardamom and cinnamon. Mixed together with butter and cream, and often combined with yogurt-marinated meats that are slow-cooked, kormas are definitely for those who want zest without the burn.

Jalfrezis date back to the time of the British Raj and as such is something of an Anglo-Indian fusion. Even so, this particular curry carries a strong but not overpowering heat, owing to the presence of green chiles stir-fried with tomato, onion, and coriander.

Vindaloo curries are, by most standards, the true test of one’s constitution with regards to spicy foods. Originally from the Portuguese colony of Goa, vindaloos go with only a few spices in copious quantities to produce an incredibly hot dish.  Those with iron-clad stomachs and palates will find vindaloos to be a delicious meal every time. 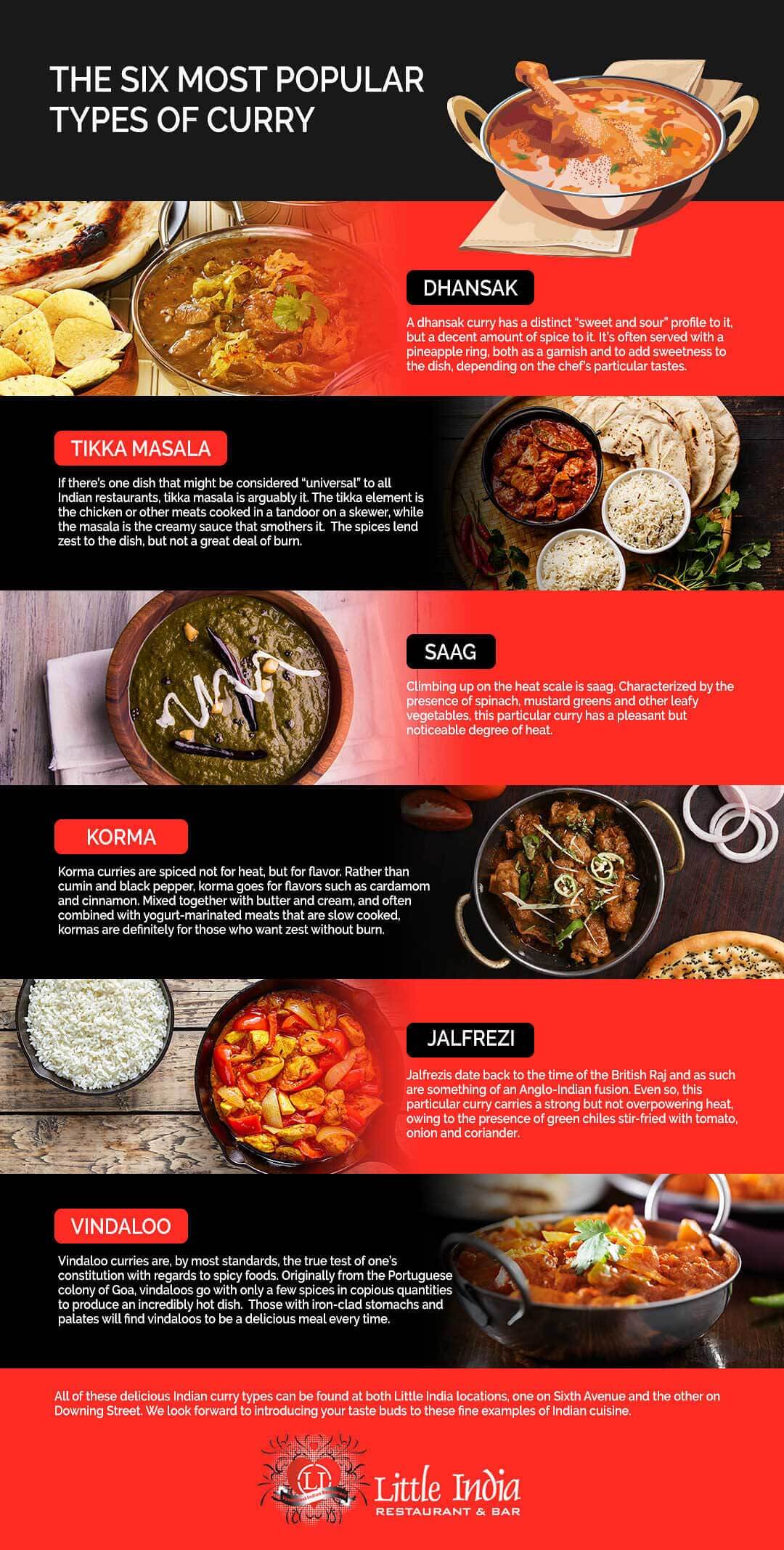 All of these delicious Indian curry types can be found at all Little India locations on Sixth Avenue, Downing Street, and West 32nd Ave. We look forward to introducing your taste buds to these fine examples of Indian cuisine.

Reserve a table at one of our three locations in Denver, CO: